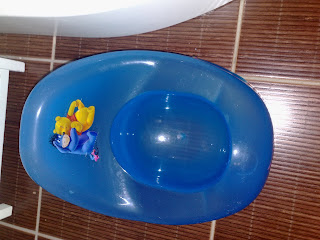 Primrose’s latest project is ‘toilet training’ Buttercup.
‘Now, take of your nappy and do pee pee on the potty, see like this. Mummy, take off her nappy.’
I do.
Buttercup performs then excitedly grabs a bit of toilet paper to finish off proceedings.
There has, however, been an unwelcome development. Buttercup will now remove her nappy (if she can) just before she poos. No matter where she is. We’re seriously considering using duct tape.
Primrose transitioned from nappies to loo around her second birthday. It was a totally toddler led process; she just decided that she’d had enough of nappies. She’d been using the potty and loo on and off since she was about 10 months old and nudey bum time (kids only) had been a regular activity in our house since she was a wee thing and she rarely had accidents when her nappy was off. One day she started taking off her nappy because it was wet (one of the joys of cloth nappies is they can tell when they are wet) and wanted to use the loo so we just rolled with it. We bought knickers, just like mummy’s (maybe a little smaller). For the first week or so everything in the house revolved around the loo We didn’t go on any car trips or do anything out of the ordinary. And she was grand. Happy out.
The only training that had to be done was training mama and dada to pick up her cues early enough. Himself jokes that I could hear her whisper the word ‘pee pee’ from the other end of the house. If she hadn’t been to the loo for over an hour and half I’d gently start pestering the poor child. ‘Need to do pee pee?’ ‘Remember you’re wearing a knickers love.’ Of course there were a few little accidents, mostly when she was too excited, busy or tired to notice what was going on.

About six weeks on Primrose was going through an emotional time. She was going to bed a lot earlier with all the running around she was doing in the sunshine and she wasn’t getting to see her daddy in the evening. She asked for nappies again and wore them for about two weeks until she was happy and secure in her world again.

When we go on long car trips I’ll ask her if she wants a nappy. Usually she doesn’t but if she’s very sleepy she’ll wear one.
She continues to wear a nappy at night time and I trust that she’ll let me know when she’s ready to go without it.

In the meantime I’ll have to tune in some more to her little sisters toilet cues. At the moment this frazzled mama is relying on her two year old who’ll come running in.’B need a potty.’ or ’ B did a poo already.’ Now where is that roll of duct tape.........
Posted by mama at 5:46 AM