No More Stuff: Toys, Shoes and other stuff.... 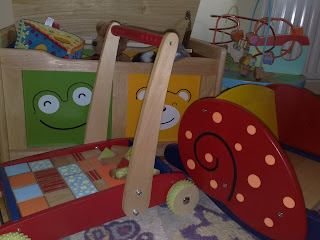 I think the success of this challenge will lie not so much in our ability to get rid of stuff and cleverly source new stuff but in our realisation that we don’t actually need that much stuff anyway.

Apparently a western baby uses 17 times more resources than a baby from the developing world*. While we are lucky to be comfortably well off in a wealthy country, now that I’ve begun to look more objectively at our accumulated stuff, I can’t help but see most of it as excess. The ole consumer mindset is difficult to lose but losing it we are (on so many levels!).

In fact this clearing out and simplifying is becoming quite satisfying in itself.

Buttercup has loads of new toys to play with, and it hasn’t involved accumulating any more stuff! A friend and I have done a toy swap. She has a little one Buttercup’s age and so last week pulled up with a car load of toys and we then filled her boot with Buttercup’s toys. Both girls have new stuff to keep them amused for a few weeks and when they’re getting bored again, we’ll just swap back.

In my spare moments I’m ferreting out stuff to give away and sell and hatching cunning plans for its disposal. I’ve found homes for a few bits on Freecycle and so far have resisted replying to any of the Offered ads! My wedding dress is on its way to Barnardos Bridal Shop and I’ve also sold a bunch of maternity clothes (well, they’re promised, the actual transaction will take place in the next few days) and some CD’s.

I’ve managed to find second hand waterproofs for Buttercup for the winter, I texted an old friend who has smallies a little older than ours and sure enough she had the desired garments in her attic.

In anticipation of Buttercup outgrowing her shoes, I’ve been looking into kids eco shoe options. In Ireland there's http://www.bobux.ie/ and I found this a fab company in Devon, Greenshoes.

We’re managing without a decent vegetable peeler for now, but I may have to splash out!

Oh, and by the way another place for advertising and finding second hand stuff is gumtree.

*(ref Gabrielle Palmer, The Politics of Breastfeeding)
Posted by mama at 5:36 AM