‘Cheese sandwiches are for mummy, daddy and Buttercup. Not for Primrose. She’s too small.’

A little voice says, ‘No fo Pimwose, too mall.’

Primrose is four months old and in danger of falling victim to toddler led weaning. Mummy’s intervention should ensure (fingers crossed) that she remains on a breast milk only diet until she’s at least six months.

When she weans we want her to do it at her own pace. We also want to help her develop a healthy attitude to food. To these ends we've decided to take the baby led weaning route. The idea is that as we introduce Primrose to a range of healthy foods we’ll let her decide how many breastfeeds she wants and how much solid food she’ll ingest. With breast feeding we’ve trusted her to regulate her own calorie intake and we’ll continue with that as she moves towards a diet containing less milk and more other food.

Like her sister, Primrose will be introduced to solid food gently and in a fun way (if it’s not forced into her by a toddler who wants to ‘share’). In order for her to enjoy experiencing the different tastes, textures and smells, we’ll go with finger food from the beginning and let her feed herself (closely watched of course).

Buttercup’s first taste of food was lightly steamed broccoli florets and carrot batons. She played about a bit and shoved them in her mouth and generally had great fun. Tgd (tinygreendada) and I were ridiculously excited when we discovered broccoli in her nappy – solid food has passed through her digestive system!

Buttercup is nearly 20 months now and loves her food. There are times when she'll refuse dinner and I’ll realise that maybe she’s had enough today or she’s had sufficient carbs so I’ll offer her some fruit instead. And sometimes it's just because she's asserting her will, but that's fine too. Mealtimes are a time to share and to enjoy both the food and each others company.

Now I just have to convince Buttercup that Primrose is 'too mall' to have her teeth brushed or be dragged around by the hand. 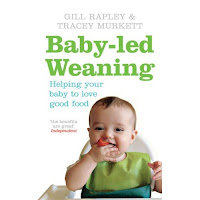 What, no puree? an article in the guardian by Joanna Moorehead. A good overview of BLW.

Baby-led. Baby led weaning website based on the book by Gill Rapley and Tracey Murkett.

Babyledweaning. Website and blog by mums, with lots of recipe ideas and ideas for starter foods.

Hannahled weaning a lovely BLW blog
Posted by mama at 5:32 AM