Right, progress report: no more stuff acquired and a little bit of stuff passed on.

I would like to say that this challenge was well thought out but actually it was more of a spur of the moment thing.

It resulted in a bout of panic after posting, in which I found myself listing stuff we would need over the next four months: vests, shoes and waterproofs for Buttercup, tights for Primrose. We were going to purchase a table and chairs for Buttercup to paint at, I would love some new clothes as I lose my pregnancy weight and the vegetable peeler has just broken. Then I began thinking, what if the washing machine breaks or the oven? 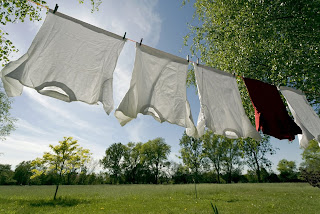 Now, don’t fret, my children will definitely not be left shivering this winter for lack of clothes. Primrose has her sister to thank for passing on her wardrobe and I bought 2 bags of second hand clothes for Buttercup about 2 months ago. We have many of the necessities and the nice stuff we can do without.

And I’m proud to report; we have less stuff now than we did last week. Our neighbours have just given birth to a tiny one, so all Primroses newborn stuff has made its way there, soon to be followed by the 0-3 collection.

But it’s definitely time to get my act together (time is an issue here with an 8 week old and a 17 month old), sell some stuff, and start a small kitty for emergencies.

In anticipation of offloading some of our stuff I’ve signed up to Freecycle and Jumbletown, both places for giving away and finding free stuff. One persons junk……and all that.

And I have company, I’ve been joined in this challenge by fellow blogger, writer, mum and friend mammydiaries, check out her fab blog!

Now, I must just getting photographing my maternity clothes (with the exception of those I’m still wearing) to offer them on Rollercoaster classifieds.

And anyone know where I could pick up a vegetable peeler that actually works (we’re all left-handed here)?
Posted by mama at 9:59 AM